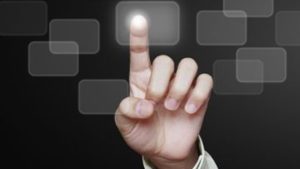 The User Interface (which I will refer to as UI from here on in because I’m a lazy typer) is the way that a user interacts with a system, whether it be a terminal, an Operating System, an application or a website. It is the level of interaction between the human and the machine. There have been numerous success stories of amazingly good user interface designs, and there have been the downright awful…  This week we are going to have a quick look at some past UIs and what we can learn from them. Next week we’ll look more at the actual design side.

First off let’s take a look at some old school stuff.

This is a terminal interface, every computer in existence has one, Windows users might know it as “Command Prompt”, it’s a very simple text based interface that can actually do quite a lot when you learn how to use it properly. The thing is, nowadays, this is not used too often. It’s main use is debugging and the average user will never ever see it. The main thing to take away from early terminal designs is the method in which users invoke the programs or functions they want to run. All of the commands are very simplistic and obvious (in the well designed ones at least) and it makes things a little bit easier on the user. That’s it. That’s the key. The user needs things to be easy.

The average user is not going to be the person who wrote the program, they are not going to be computer experts and are not going to know what you meant by your acronym. In order for your UI to be effective and appeal to the widest range of people it needs to be simple and effective, now this is actually pretty obvious isn’t it? We’re not discovering anything new here so let’s look at a few more modern examples.

For years Microsoft had used the exact same UI in every iteration of its flagship software Windows. Then, out of nowhere, came this thing. Windows 8. Initially, everyone hated Windows 8. Admittedly a lot of people still do. But, to be honest the new look is quite capable and functional even with the huge change. Everything functions well together and I haven’t had any major dramas with it thus far… But. (As always, there is a “but”)The thing is, Windows 8 uses what is called the “Metro style” of UI. Those big pastel coloured buttons and tile like interface all make for what is honestly a very confusing user experience. From Windows XP, Vista and 7, upgrading to Windows 8 promises quite a steep learning curve. When you get it though, It is extremely easy to use, everything is literally “right there”. Just type it in from the start menu and chances are it will appear. If not just change your wording slightly.

So what did we learn from Windows? Don’t be afraid to break out of the norm. Try something new. If it looks like it will work then do some tests and go for it. There are a million and one ways interact with a machine, you can use the old mouse and keyboard, you can use touch, voice or on newer things you can even use your eyes. The possibilities are limitless.

The last example we’ll look at is iOS. The primary thing coming out of Apple lately is its iPhone. In all honesty, I personally am not a fan, the settings and customisation is horrible and the one I had (for a very brief period) was slower than a rock. I will admit however, that’s its interface is almost flawless. It is simplistic, easy to navigate and it is obvious what you need to do to progress through its features. As long as you don’t want to do much more than read your messages and browse the Internet then the UI is amazing. The whole thing is image based and that is actually the thing to take away from Apples offering. The modern person does not like to read. We are a very visual society now and any information that can’t be processed in less than five seconds generally isn’t taken in at all. Images make something in the brain click as soon as the user sees them. Which means if you have well designed images then the user will know exactly how to traverse your UI.

That’s it for this week. Stay tuned because next week we’ll look more into how you can actually make sure your UI will be effective.

In the meantime hit us up on any of the following social medias portals and stay in touch. We’d love to hear your input so swing us a message or just leave a comment below!