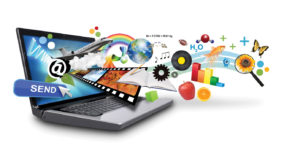 This week we’re going to cover something that everyone loves but not too many people think enough about. When thinking about having their own website, people immediately just want to put as much content on as possible without considering the consequences. “I want pictures and videos and sound and games and moving things and…and…” That is a sentence web developers hear far too often. In this topic we’ll have a quick look at some of the different media types possible on the Internet and why you probably shouldn’t use them on your website.

First up is graphics, pictures, images, whatever you want to call it. Graphics are a basic necessity in most websites and frankly the Internet just wouldn’t be the same without the 14 million pictures of cute cats. Websites can be made to look extremely appealing with the appropriate use of graphics, but sometimes…well people just go over the top. Layering a hundred different images is not a good idea. Having a huge image as a background is not a good idea. Although the speed of the Internet around the world is slowly improving having a website that takes longer than a couple of seconds to load will mean that visitors will abandon it before they see your first “amazing ocean view”.

The second media type we’ll touch on is animated graphics. The primary type of animated graphic on the Internet is the trusty “gif” (with varying pronunciations) but now there is a newer type that goes hand in hand with modern browsers called a “webm” (although it still has a few issues). These file types are, in my opinion, very over used. Moving things on a website is usually a distraction and honestly if there were lots of moving things on a website I would leave the site quite quickly. Obviously you can use them if you wish however, please, for the sake of all Internet users, use them sparingly and tastefully.

Something that is pretty close to animated graphics is animated text. Text flying in from the side belongs in a music lyric video and not on your professional website. If you feel the need to have scrolling text or make it look like your words are burning then you seriously need to reconsider that idea. I’ll admit, when this sort of thing was all new and exciting it was awesome to have words that dissolved in front of you but after about five minutes it got boring. Really boring. In terms of the Internet animated text is extremely old fashioned and there are a lot more opportunities available with modern technologies to make your website look clean, classy and professional.

Videos are a bit of a hit and miss. On one hand they can add some wonderful content to a website and do not add to the loading time at all if you allow the user to choose when to play the video because all modern standards mean that the video is streamed piece by piece and not all at once. On the other hand you have videos like those on Facebook. You know those annoying things you see because one of your so called “friends” liked something? It automatically plays in your news feed unless you choose to turn the feature off (which the option for is buried deep in account settings). If you are on a mobile device this chews up your data allowance faster than anything else and a lot of the time the video is not something you actually want to see.

The final media type I’ll look at here is sound and the answer is no.

Never. Just don’t do it. The fact is that sound or music on a website is horrible. The majority of the time the user is already listening to music and/or doesn’t want it to be interrupted by your “soothing whale noises” that you have automatically playing in your website and of course you didn’t include a button to turn it off because “why would anyone want to turn it off?”. If a user specifically went to your website to hear noises or sounds or music then they will not be bothered by one more button that says “Play” on it and that is the end of the discussion right there.